SLOVAKIA TRIGRANIT
Maybe you already know it: TriGranit, one of the largest property developers in Europe, in cooperation with Harrah’s Entertainment, the largest gaming company in the world, will build a large leisure and shopping complex with a large casino in Slovakia, just near the border with Hungary and Austria.

Here’s a line from an article (SLO) in SME.sk: “Something of this size and scope does not exist in Europe yet.”

The project has the government’s support; namely, the finance minister Ján Počiatek has been mentioned in the media often in connection with it.

But not everyone likes the idea of casinos.

One of the opponents is professor Dr. Jozef M. Rydlo (SLO), a historian with non-mainstream opinions, a holder of one of the highest Italian honors. During the communist era, he lived in West European exile, now he’s a parliament member for the Slovak National Party (SNS, a minor member of the government coalition).

Someone who knows how Rydlo voted in the case of Kosovo – as he declared (SLO) himself, against his own opinion – should be a bit surprised that he openly criticizes a government-supported project (which, in his view, is united with crime), and minister Počiatek (labeled as a ‘madman’), a member of the main coalition party.

But now he took it really seriously (SLO):

Let’s organize petitions, let’s send opposing opinions to those who are deciding about us without us, let’s think about who we will vote for, let’s contact leaders to whom moral and high-principled life is still not foreign. There is still enough time, but it all depends on everyone among us, how actively we will fight for projects promoting positive human values.

Rydlo’s article was originally published on a less-known server and might have been forgotten soon. But SME.sk newspaper published its own article (SLO) and comment (SLO), in which it described Rydlo’s work as in large part a copy of a blog post written by Andrea Kaľavská a few days earlier. Kaľavská is an assistant of an opposition parliament member for the Christian Democratic Movement.

In the copied parts, Rydlo is said to have made some cosmetic changes, such as removing notes about the prime minister. He kept the part about the city where he lives (and near which the casino will be built), even though in his profile he declares a different address. The closing part of Rydlo’s piece, quoted above, is not part of Kaľavská’s blog post.

The server where Rydlo is publishing is often labeled to be at the border of extremism, and this is not first time Rydlo has been featured negatively in the press. He became known already because of the (unusual) kissing (SLO) of the Slovak Constitution during his parliamentary introduction in 2006. Later, in 2007, the Swiss Berner Zeitung published an article in which it was claimed that his professor title was fake and that he had gotten it from an organization that he himself founded and was the only member of. Also, his former colleague said anonymously that his acting on various universities should be better described as changing of schools after short time. Other allegations (SLO) against Rydlo include book thefts, domestic violence, an attempted murder – and psychiatric disability payments that Rydlo was receiving in Switzerland (and which were higher than the Slovak average monthly wage), while being on the Slovak parliament’s payroll.

Here’s a selection of anonymous netizens’ reactions to Rydlo’s response to the construction project, posted (SLO) at SME.sk portal:

Don’t be bad to mister professor. Except that to the nation of Slovaks he is already nothing else.

I also wonder why they are still attacking Rydlo, instead of just being happy that any parliamentarian from SNS is able to even copy the whole page of text.

He was able to modify some sentences. That is proof of originality, extraordinary in his environment.

Do you think that fool would be awarded with the Order of Merit of the Italian Republic?

Those payments for the disabled because of schizo really belong to him.

It is a tragedy that Rydlo, despite everything, represents the intellectual top in SNS, and an even bigger tragedy that Smer (the main coalition party) has joined forces with something like this. The government of national shame.

And I thought Rydlo was already written off because of his [fake] titles, and he is still writing copies… He would write off himself alone! 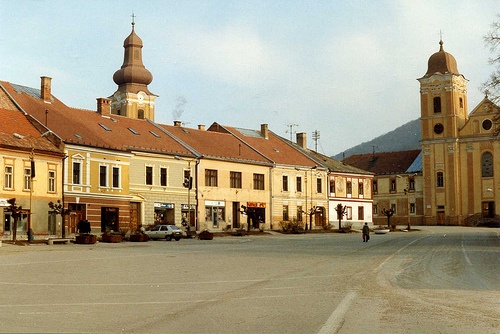