Odds on Which Sports League Will Fold Next: What's Your Pick?

Odds on Which Sports League Will Fold Next: What's Your Pick?

AFL MLB NASCAR NBA NFL NHL PGA UFC WNBA WWE
Reports began circulating that the Arena Football League (AFL) would be halting operations last week, to the dismay of some fans. The news sparked debate and discussion regarding which league could potentially fold next, and what the chances were of one of the big four leagues folding. With fans looking for answers, the largest sportsbook on the web, BetUS posted odds on which league would fold next. 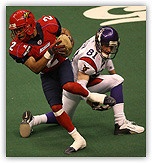 Which League/Body will fold next?

Which of the Big 4 Leagues will be the first to fold?

Which sports league do you think will fold next?

[thanks to betus and doctor noe via cc]