BADUGI RAZZ
Lowball poker games are variations of poker in which low hands are used to determine the winner at showdown. There are quite a few different lowball poker games and in this article we will look at the three most popular Badugi, Deuce to Seven Triple Draw and Razz.


Badugi is a lowball poker draw game in which players are dealt four cards and can exchange their cards during drawing rounds in an attempt to improve their hand. Suited cards and pairs count against you when playing Badugi making the best possible holding an A-2-3-4 rainbow. There is a pre draw betting round followed by three drawing rounds and three betting rounds. Badugi was only introduced into the online poker world in 2008 and since then has began growing in popularity ever since. 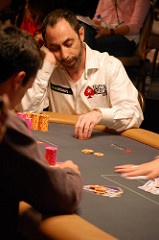 Badugi is widely considered a crazy gambling game but there is a lot more skill to playing than many players think. It was first introduced to the USA by Paul Eskimo Clark and has been popular in both casinos and home games ever since. It first hit the online scene in 2008 and is steadily growing in popularity among online players.


Deuce to Seven Triple Draw is a lowball poker game with three drawing rounds. Players start the game by getting dealt five cards. A round of betting commences which is followed by three more rounds of betting with drawing rounds in between. When playing Deuce to Seven Triple Draw aces are always considered high cards and straight as well as flushes count against you making 2-3-4-5-7 the best possible holding.


Razz is one of the most popular lowball poker games in to be introduced into the online world. Players start out with three cards, two face down and one face up. The player with the highest card exposed is forced to bring in the action and play moves around the table in a clockwise direction. Players then get a fourth card face up, a fifth card face up, a sixth card face up and a final seventh card face down.

Pairs count against you when playing Razz and aces are always considered to be low cards. Straights and flushes mean nothing and the best possible hand is A-2-3-4-5. Of all the lowball poker games Razz seems to be the most popular by far among the new internet poker generation.

Where to Play Lowball Poker


You can play lowball poker online at most poker sites but the best traffic is at the two biggest online poker rooms in the world Full Tilt Poker and PokerStars.