Information on the Psychology of Why People Get Gambling Addictions

Information on the Psychology of Why People Get Gambling Addictions

ADDICTION
Professor Mark Griffiths has been kind enough to give me a few minutes of his time to answer some questions about his research on gambling, his feelings on being included in the new 2008 specification, and what relevance his studies have to help us understanding gambling and addictions in general.

Dr. Mark Griffiths is a Chartered Psychologist and Professor of Gambling Studies at the Nottingham Trent University. After completing his PhD on fruit machine addiction at the University of Exeter (1987-1990) he secured his first lectureship at the University of Plymouth (1990-1995). Since then, he has established an international reputation for himself in the area of gambling and gaming addictions and has won many awards for his work including the John Rosecrance Research Prize (1994), CELEJ Prize (1998), International Excellence Award For Gambling Research (2003), Joseph Lister Prize (2004), and the Lifetime Achievement Award For Contributions To The Field Of Youth Gambling (2006).

Chatting with Mark gave me an excellent opportunity to ask about the area of psychology in general, what Mark is doing at the moment, and also he puts this study in the context of other studies that he conducted in the late 1980s early 1990s.

Being naive to this area of psychology I thought it pertinent that I asked Mark to summarise what he does and the domain that he works in: behavioural addictions. Even though Mark’s most cited work is on gambling, this work has given light to work on other addictions such as internet addiction, video game addiction, exercise addiction and sex addiction. Many don’t see excessive behaviour as addictions, but for Mark gambling is the breakthrough addiction. Mark argues that when gambling is taken to excess it can be comparable to other more recognised addictions like alcoholism. If you accept that gambling can be a genuine addiction, there is no theoretical reason why other behaviours when taken to excess cannot be considered potentially addictive.

Interestingly, over the 20 years that Mark has been studying this area the number of people that I have genuinely come across that are addicted to video games are few and far between. A key feature between excessive use and addiction is the detrimental effects (or lack of) that arise as a result of that behaviour. When people are addicted to a behaviour “[that] becomes the single most important thing in their life, they compromise everything else in their life to do it, personal relationships are compromised”. 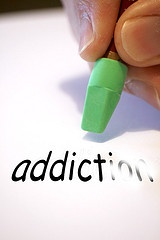 This I found was a particular point to focus on. When does a behaviour become an addiction? I hadn’t really thought about this before and just took the word at face value, but it’s a very subjective issue. As far as Mark’s concerned two people could have the same behaviour (say playing on a computer or gambling £20 a day) but one could be defined as being addicted and the other not – it’s all to do with the effect on the rest of their lives.

“Healthy enthusiasms add to life; addictions take away from it”

So, why do people get addicted to things? Can we get addicted to anything? Mark’s belief is that as humans we wouldn’t do something excessively without getting any rewards from it. Rewards underlie all addictive processes and as a result there are some things that you can’t get addicted to:

“You can’t get addicted to a bi-weekly national lottery because there’s only two chances a week to find the results of your gamble. However a slot machine where you can gamble 12 times a minute there’s physiological rewards, people get a buzz or a high, from when they win or when they nearly win, they get peer praise from when they do something well, financial reinforcement of playing. The rewards you can get from gambling are spread across the spectrum: physiological; psychological; social; financial.”

Mark puts forward this theory of a ‘near miss’ with ‘hardened gamblers’ not constantly losing but constantly nearly missing. On a cognitive level they (the gamblers) turn all these losing experiences into near wins. It’s this thought process that keeps the gambler coming back to the slots – they almost convince themselves that these losses are near wins which can reinforce their behaviour more. It’s important not to become reductionist when looking at gambling as it’s such a complex behaviour. Mark works within a biopsychosocial model in that all human behaviour is a result of biology plus psychology plus sociology and it’s important to realise individual differences.

Taking this point on board, I then wanted to know about the gender divide, both in the study (which Mark highlights himself in the BJP study) and in gambling as a whole. Why is gambling such a male dominated activity? First, there’s the social element to the locations of fruit machines; arcades and pubs: once male dominated places. Females are not rewarded socially for being in these places and if they are there it’s more of a ‘cheerleader role’. However, now as gambling has come out of these environments and into the home and workplace (think internet gambling; mobile phone gambling; that naughty little red button on the television remote), Mark predicts that the gender divide will even out.

One thing that jumped out of the paper when I first read it was the lack of inter-rater reliability in the coding of the verbalisations that he measured. Is this something that we should be concerned of – could this be the Achilles Heel of the study? In the context of this study it seems that actually having a second rater might have added a confounding variable in itself. Another rater wouldn’t have had the time with the data that Mark had had, and wouldn’t have been there at the time of the experiment. In support of this Mark also highlights the consistency of other research in their area that supports the findings from the BJP study.

Moving onto the discussion of the 1994 study Mark talks about audio playback therapy as a type of CBT that might be useful in treating problem gamblers. Does this form of CBT work and has there been any more research on it? Mark has actually published the only research into audio playback therapy. The concept behind auto playback therapy is to get the gamblers to realise how they speak and behave when they’re in front of a slot machine.

So, we’ve looked at some reasoning behind addiction and some of the particulars of the 1994 BJP study. Lets pull back a little and look at addiction from a more general sense again: addictive personality – is there such a thing? Mark is firmly on the ‘No’ side of this argument. Mark argues that to say that there’s an addictive personality you would need to show that there’s a set of predictive traits that is predictive of addiction and addiction alone. There are lots of personality traits that have been found to relate to specific addictions. However, there are also people who are not addicted with these same traits therefore these cannot be traits that are specific to addiction. However, Mark does believe in ‘reciprocity’ that addicts who give up one addiction often move on to another. For instance, when sitting in on a Gamblers Anonymous meeting, Mark is often greeted by a bunch of coffee drinking, chain-smoking individuals.

Finally, it had to be done. I’d been on the phone with Mark for over an hour and I hadn’t asked the question that I’m sure he’d been asked a million times, but the temptation was too much: Mark, are you a gambling man? Not surprisingly he had a stock answer for this (and yes he had been asked it a few times in the past): “yes I do, roulette is the game that I play – but when I’m playing roulette I’m actually buying entertainment rather than trying to win money. When I am playing on slot machines though I call it ‘research!’

Many thanks go to Mark for his time talking to me.

[thanks to jamie davies via cc]