Getting Sic With It: A Player's Guide to Sic Bo

Getting Sic With It: A Player's Guide to Sic Bo

SIC BO
Sic Bo is a dice game which originated in China (introduced in the 20th century) and is known by such names as dai siu or tai sai, hi-lo or big and small. This game is very popular in Asian countries such as the Philippines and the game is known there as hi-lo. Sic bo is also widely popular in Macau.

This game is also very popular with the Americans and is consistently played in almost all American casinos.

So how do you play Sic bo? The player needs to bet on various dice combinations. Three standard dice are then shaken into a plastic cup or bowl. In the traditional way, in Asia, these dice are shaken into a small covered plate, in which the cover is lifted up to reveal the outcome of the number in the dice. Nowadays, the dice are shaken mechanically and the results are revealed via computer. The winners of the wagers get their winnings according to the fixed odds of the dice. 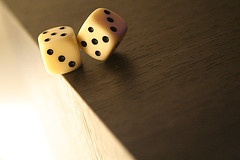