ANDY MORTON
[I’ve been] thinking about the mysterious “Morton’s theorem,” which is often referenced but rarely explained. It was offered up as an RGP post several years ago by the late, great Andy Morton, who tragically died in a Motorcycle accident at age 34. No doubt Morton would have been a star in the poker world, as Lou Krieger, Abdul, and Izmet have all attested to.

Below is my attempt to explain Morton’s theorem, a very important concept not only for low-limit games, but for the general understanding of hold ’em.


Andy Morton read a Mike Caro article in Card Player in 1996 which advocated never raising from early position in loose hold ’em games: “The mistake is raising when many potential callers remain behind you, thus chasing away your profit.” Morton got to thinking about this, and argued against it in a post to RGP in 1997.

However, not raising when your hand is best violates Sklansky’s fundamental theorem of poker, which states:

In other words, if you raise in early position with AA, and show your rockets, players in late position should not cold call their AT suited– you gain from their cold calling, and they lose.

But of course we’ve all seen rockets go down in multiway pots. Another version of the question could be stated as, “Do we want our opponents to chase with weak draws when we are betting the best hand?” So Morton got to thinking (and talking with Abdul), and made an effort to figure out why Caro was wrong about not raising with the best hand in low-limit games:

“What I’m going to tell you is that if you bet the best hand with more cards to come against two or more opponents, you will often make more money if some of them fold, *even if they are folding correctly, and would be making a mistake to call your bet.* Put another way, *you want your opponents to fold correctly, because their mistaken chasing you will cost you money in the long run.* I found this result very surprising to say the least. I’ve never seen it described correctly in any book or article, although at least a few posts to this newsgroup have concerned closely related topics.”

Thus, Morton found that there are times when the Fundamental Theorem of Poker is violated in multi-way pots. I’m not going to get into the details (see Andy’s original post for this), but Morton shows that there is a certain range of pot sizes for which it is correct for the chaser to fold (odds wise), but you make more money when he folds than when he incorrectly chases.

Let’s look at a simplified example:
You hold 77 in early position and the button holds AK hearts. You raise and 4 players (including the button) cold call. The flop is Qh Jh 7c. Assume that our set of sevens represents the current best hand. Obviously, the button has the best draw. Morton’s idea is that for every incorrect call the 3 players between us and the button make, the potential profit is divided between us and the player on the button. We can picture half of these calls going into our stack, and half of them going into the button’s stack.

Now let’s pretend that two of the players are colluding. Player C1 holds 98o and player C2 holds QJc. So Player C1 has a gutshot (4 outs) and Player C2 is drawing to the full house (4 outs, since another 7 gives us quads). With 5 BB in the pot on the flop, C1 (about 11:1) and C2 (about 7:1) individually are not getting the proper pot odds to draw (considering only the turn, for simplicity). However, together C1 and C2 have 8 outs, and are getting 4.7:1. So if these two fish play together, implicitly (implicit collusion) or explicitly (collusion), they are making the correct call.

This is the notion of “implicit collusion” and “the schooling of the fish.” Although individually, C1 and C2 are making the incorrect play, from your perspective, the 2 headed fish have enough outs that they are getting the proper odds to draw. To make things worse, their calls are divided between you and the button, who has the best draw. Morton’s Theorem says that we want the fish to fold in a multiway pot, even if they are getting the incorrect odds to draw out on us.

This “schooling” makes it very tough for the player with the best starting hand to win, and leads to the bad beats we see all the time at the lower limits. If 5 players at a table never fold, then together they have many, many outs. 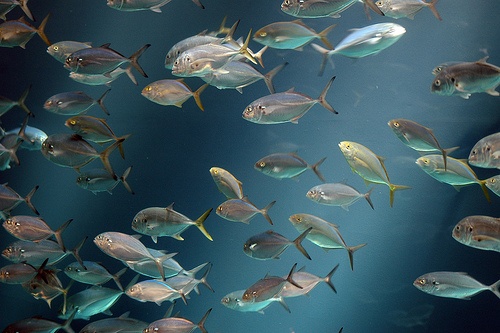 [thanks to mike johnston and hdouble via cc]