Derren Brown's Magic Trick Explained: How to Take Down a Casino

Derren Brown's Magic Trick Explained: How to Take Down a Casino

PSYCHIC MAGIC DERREN BROWN
I hoped I’d have something to say today about Derren Brown’s latest TV stunt: How to Take Down a Casino.

The idea was that he would predict live on TV the next number to be spun on a roulette wheel in an actual casino somewhere in Europe by placing a bet of £5,000 using money that he’d previously stolen from a viewer without them realizing.

Sadly, I just didn’t get it.

If you didn’t see the show, this is the only copy on YouTube currently that Channel 4 haven’t zapped yet:

And then the credits rolled. The end.

What we apparently saw was Derren with a hidden camera up his sleeve and one other undercover cameraman filming him using his super-charged brain to assess the velocity of the wheel, calculate the speed and rate of deceleration of the ball and then compute where it was going to land. Except he didn’t – he was off by one.

There are indeed computer systems designed for cheating a casino that can do this, and they only aim to predict a segment of the wheel where the ball is going to land.

Even Jessica Alba’s super cat-person mind can’t be any more accurate than that: 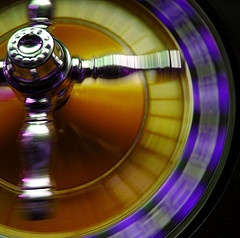 I couldn’t find a version of this clip with the sound (a song in the background got it removed by YouTube), but you can read the script here. Spin to about 2:00 for the start of the action. At 2:20, she says “I can tell you where it’s gonna land, but I can’t call the bounce”.

On a side note, I noticed that the TV gambling channel SuperCasino.com has a “live wheel” roulette game with an automated wheel, where the ball gets to orbit the wheel at least a dozen times before it’s too late to place a bet. If this game is fair, it should be beatable by anyone with a home computer and the right software. And yet they’re still in business…

Although there’s no reason not to believe that parts of Derren Brown’s show were live (the parts with the viewer who had been mugged were a decent convincer) my main problem is that I just don’t believe it took place in a real casino.

I thought it was just plain odd that a European casino would have the layout written in English. Certainly, in France this wouldn’t be the case. There would be bets for “Pair”, “Impair”, “Manque” and “Passe”, and it’s traditionally a wider style of layout.

Clearly I can’t say for sure how it works in every European country, but I thought that in the same way that American casinos offer European or American roulette, in Europe the choice is generally between American or French roulette. While American Roulette may indeed have a layout printed in English, and I guess you may even find those dealers speak in English, the game would have a double-zero wheel.

Not to mention that before Derren is even playing at that table, you hear the dealer announce “sixteen, red”. In English, and English only.

But, most importantly, isn’t it lucky that the table he’d singled out, that he’d been watching for weeks had a spot open at the right moment he needed to place the bet live on TV? Not only that, it was a spot that gave his hidden camera an excellent view of both the part of table he was moving his chips into, and the wheel itself.

Assuming that this bet was not taken by a real casino, it actually makes sense that he would plan for the result to be not quite correct. Otherwise, with a perfect prediction, it would be Channel 4 who would had to find £175,000 to pay out to the mug who apparently bankrolled the stunt.

Coming close by one is the next best thing to getting it spot on, but if that’s the end of the show and the result of an hour of hype is “close but no cigar” (rather than revealing the actual number that was spun had already been written on a nearby chicken, or something) it’s rather lacking in both flair and impact.

Which, frankly, fits in with the other shows in this latest series.

I’m a big fan of Derren Brown. I’ve seen three of his stage shows, two of which were amazing and the other was pretty good but spoilt, I thought, by an obvious switcheroo as part of the final big reveal.

Until now I’ve loved the TV shows and they’re still among the very few programs I make a point of watching. I know the tricks he does are almost never anything at all to do with what he says they are. But if he’s still producing an illusion that makes you think “how the hell?”, or just creating compelling TV, I don’t really care. He is a fantastic entertainer.

In fact, the part of last night’s show where he made a girl throw a squash ball into a court and accurately predicted where it would finally come to rest after several bounces on a numbered grid was an impressive piece. Of course it had nothing to do with his explanation of extreme mental physics calculations. That’s just Derren’s “Abracadabra”. But it was an illusion that made me think “that’s so cool” while scratching my head over how it was really done.

However, I was left thoroughly disappointed that his lottery prediction stunt gave me no reason to believe that it was anything other than a camera trick.

His attempt to control the nation using a subliminal film (which “won’t work if you watch it on the Internet” – despite YouTube now being able to carry a better quality picture than terrestrial TV) left me feeling like I’d wasted an hour because it didn’t do a thing for me.

Then his attempt to project an image into the minds of viewers was so blatantly obvious that I wondered how on earth only about a third of people actually got it.

This week I’ve gone full circle. There’s absolutely no reason to think this wasn’t another camera trick. Either the casino scene was pre-recorded all along, after as many takes as it took to get a spin where the bet placed was one away from the actual number, or the film was switched out (like they do to Dennis Hopper in Speed) to show an earlier spin once Derren had placed the bet on a neighbouring number.

The interference on his hidden camera feed (which I don’t believe is genuine anyway, they had weeks to plan this and work out how to get a good signal) would have made it easy to splice that in, and there’s no communication with the guy in the truck once the casino cams go live.

While the lottery prediction at least had an initial “wow” factor because it was done live at the same time as the actual draw (before he completely spoiled it in the reveal show with a preposterous explanation), going to so much effort to make it look like he missed a spin of a roulette wheel by one number is just, well, meh.

OK, I guess I did have something to say about it after all.

[thanks to ladyann and lucky donut via cc]