Underground sports gambling rings are often associated with the mafia.

Ok, maybe it’s not such a surprise.

Location in this story is Atlantic City in New Jersey, home state of Tony Soprano in the hit HBO show The Sopranos.

23 people have been charged with taking part in a high-stakes poker room with underground sports gambling. And yes, some of these people had a connection with the mob. Specifically, the Philadelphia-South Jersey Mafia. 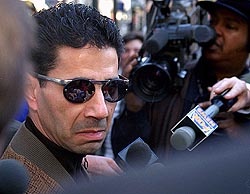 Andrew Micali, 32, who is suspected to be the ringleader of this illegal gambling ring, is an associate of jailed Philadelphia mob boss Joseph “Skinny Joey” Merlino, who is an alleged member of the “Cosa Nostra” mob family. Micali is being charged with loan sharking, money laundering, gambling promotion, and criminal usury. No word if he’s made anyone “sleep with the fishes” or busted any kneecaps in his loan sharking business.

Also arrested in the casino sting were associates of Micali:

“They sought to escape detection by enlisting casino employees in their crimes,” said New Jersey Attorney General Anne Milgram. “I’m pleased to say they greatly underestimated our vigilance and determination to keep organized crime out of Atlantic City casinos.”

Even Borgata employees were in on the heist

The main issue here is that Atlantic City does not have a legal sports book offering, unlike Las Vegas. A spokesman for the Borgata named Rob Stillwell mentioned that some of the arrested people had ties with the Borgata and were “rogue employees”. Some of these casino employees included dealers, bartenders, and poker room supervisors. Borgata supervisor Joseph Wishnick, 42, was among those under custody by New Jersey police.

Bail is set for $100,000 for Micali and at $50,000 for the others arrested and currently in custody at the Atlantic County Jail.

If they get convicted this could be one of the biggest mafia casino connections in Atlantic City since the first casino in the area in 1978.

How the mafia pulled it off

The group had “wire rooms” in Philadelphia where they tallied up the bets wagered and they calculated winnings and payouts. They marketed and publicized their illegal underground casino ring predominantly by word of mouth from gamblers. These gamblers would then place their bets in the Borgata poker room. They did money laundering by getting casino employees who were their accomplices in the heist to not record exchanges of cash and casino chips, a practice called “chip washing”.

“It involves taking cash, turning it into chips, ‘washing’ the chips by betting and then turning them in, and taking cash out,” said Milgram.

They would then force losing gamblers to take out loans from the gambling ring. These loans were charged at more than 50%. And I’m sure they added, “And we’ll break your kneecaps if ya don’t pay up”.

More than $40,000 dollars of cash and Borgata casino chips were seized from Micali’s safe deposit box in the casino, along with gambling records, a laptop computer, and a .357 caliber semi-automatic handgun in his Ventor home. The police also froze his $200,000 bank account.

New Jersey has had a long history with organized crime, so when legal gambling began they had some really tight controls on there. But they’ve relaxed their gambling regulations over the years as the mafia stranglehold dropped. This just makes people get real antsy when hitting up New Jersey casinos.Back in the day, the governor at the time, Brendan T. Byrne gave that infamous speech when he legalized casino gambling in the area, “I’ve said it before and I will repeat it again to organized crime: Keep your filthy hands off Atlantic City. Keep the hell out of our state!”

This isn’t the only problem New Jersey has had with sports betting recently. In 2006, National Hockey League (NHL) coach Rick Tocchet was charged with running a sports gambling ring and pleaded guilty.

If you want a mafia-related sting similar to this, back in 2004, underboss Joseph “Mousie” Massimino was put in jail for 10 years for managing a large sports gambling ring in Philadelphia and South Jersey – which was very similar to this one.

Reactions to the arrests

This is crazy! I mean we all watch the Sopranos and we may think it’s just a television show but damn, this is real life! There’s a long history with organized crime and casinos – some may say they built Las Vegas – and it looks like that relationship is still alive today.

Does the mafia still have some control over casinos in modern times?